Imagine a child you know is bought and sold. For sex. This is sex trafficking. And it’s happening right here in Minnesota. To our neighbors.

What is Sex Trafficking?

Sex trafficking is the sale of a person for sex or sexual acts. Sex traffickers may be family members, friends, recent acquaintances, or “boyfriends/girlfriends”of the person who is trafficked. Traffickers use violence, threats, and manipulation to control their subjects. As one pimp said:

The goal is to get the girls as dependent as possible. Mentally you’ve gotta burn into their brains you’re the only one…you’re god. Once you’ve got that down and they’re ready to work…then you instill the fear…the wrath of god. If they mess up, there’s a price to pay, and they know it’s a heavy price.

Sex trafficking is not only a human rights violation, but also a public health crisis and a personal tragedy.

Does Sex Trafficking Exist in Minnesota?

Yes. Minneapolis is one of the top locations in the U.S. for child sex trafficking. A six-month study by local prosecutors found over 34,000 advertisements posted online for sex in the Twin Cities. But sex trafficking is not just a Twin Cities problem. Trafficking affects people from all parts of Minnesota. An online sting in southwest Minnesota led to the arrest of 48 individuals. One 16 year-old who was trafficked in northern Minnesota stated that she was exploited on average by five men every day―which means that she was exploited over 1,800 times in a year. 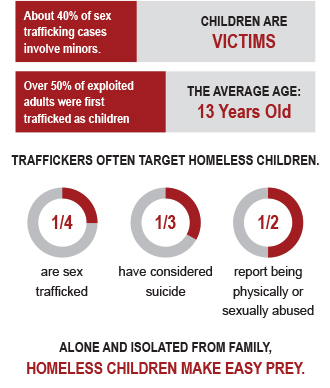 Sex traffickers are master manipulators. They target vulnerable people, including kids, people who are chemically addicted, young mothers with children, and people who have a history of abuse, neglect, or mental health challenges. Sex traffickers may get victims hooked on drugs to control them.

One national study found that being homeless for longer than 30 days was the single biggest factor for teens to become sexually exploited. These children often get involved in sex trafficking as a form of survival. Many of these children leave home in the first place because of drug abuse, physical abuse, incest, or other dysfunction in their families.

What is Minnesota Doing to Stop Sex Trafficking?

Sex traffickers face up to 20 years imprisonment for trafficking a child, up to 15 years for trafficking an adult, and up to 25 years for child trafficking involving an aggravating factor, such as causing the child physical injury. Because child victims are no longer treated as criminals, they are more willing to come forward and testify against perpetrators without fear of criminal reprisal.

Since the enactment of the Safe Harbor Law, Minnesota law enforcement agencies have doubled the number of sex trafficking convictions. In 2016, an offender charged under state law received a sentence of 58 years in prison for trafficking seven women in the Twin Cities. Federal authorities are also working to curb sex trafficking. In one 2016 sting, the Federal Bureau of Investigation rescued 105 children and arrested 152 pimps in 76 cities nationwide, including four alleged pimps in the Twin Cities.

How Can I Help?

People who fall prey to sex traffickers need help. Awareness of potential sex trafficking signs―and knowledge of how to help―can save lives. Many people and businesses are in the position to recognize these signs. For example, healthcare officials are among the most likely community members to come in contact with trafficked individuals. So are hotels. But here are some things we can all watch out for:

What Should I Do?

If you encounter a child or adult who may be trafficked, here’s what you can do:

1. Call 911, the police, or the sheriff if anyone is in immediate danger.

2. Contact the appropriate Safe Harbor Regional Navigator. Information for each regional office is available one the Safe Harbor website.

4. Many trafficked individuals are in need of shelter and resources. If you are a landlord, you may be able to help by providing shelter. Other people may be able to help by making a charitable donation to organizations that help trafficked individuals. Before making any charitable donation, you should check the reputation of the organization on the Minnesota Attorney General’s website at www.ag.state.mn.us/Charity/Default.asp.

Our neighbors are worth this fight.
They can be helped.
One person at time.

A Guide for Victims of Stalking

Stalking is intentionally following or harassing another person. The victims may live in constant fear of their stalkers — who can include former spouses, ex-partners, or strangers. Stalking is a serious crime in Minnesota.